Our children’s program for ages 3-12 includes morning and afternoon sessions. Children will enjoy folk dancing, singing, games, cultural activities, flute instruction, and crafts.  A family Táncház , led by our children’s instructor, will be held before the regular Táncház most evenings. 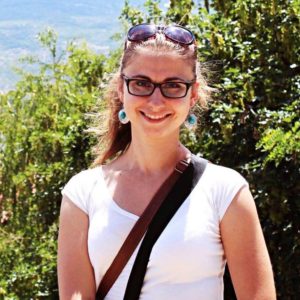 Renáta Mohácsy-Kisfalusi has extensive experience organizing and directing folk programs for all ages. As a student, she was part of the organizing team for the Tatai Sokadalom and the Győrújbaráti Nemzetközi Néptáncfesztivál.  In 2015 she graduated from the Hungarian Dance Academy (Magyar Táncművészeti Egyetem) with an emphasis in folk dance and rehearsal direction.  Since then she has been teaching folk 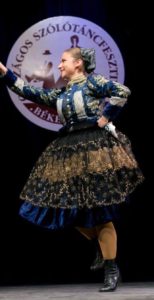 dance to kindergarteners in various schools in Hungary.  She specializes in providing multi-disciplinary programs to engage her students in learning not just folk dance, but also folk instruments and costumes, handicrafts, and customs. As director and choreographer of the Kis Csepel Táncegyüttes she has organized many learning extension opportunities including several foreign tours, study trips, team-building exercises and excursions to learn folk dancing traditions. Since 2015 she has been an instructor at camps in Hungary, such as the Hatetudnád Néptánctábor (Szeged), the Forrás Táncegyüttes youth camp, and the Libabőr Néptánctábor (Boldogkőváralja), teaching dance, singing, and costuming.