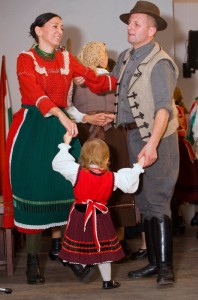 Born in Transylvania, István (Pisti) Kis grew up in the authentic environment of Magyarlapád. From 1995 through 2004, he worked as a professional dancer of the Háromszék Ensemble. István regularly teaches and choreographs at various schools, amateur groups, and camps, including Magyarlapád, Kommandó, Erdővidék, Szászcsávás, and Csipke folk dance camps. He has won various awards, including first and second place at the International Legényes Competition with the Magyarózd and Méra pontozós. In 2004, István earned the prestigious Young Master of Folk Art award from the Hungarian government. He has studied folk dance teaching at the College of Performing Arts in Budapest. Since 2005, he has been the artistic director of the 130 member Bem Ensemble. He married his wife, Erika Kis Demeter in a traditional wedding in Magyarlapád, which was aired on Hungarian TV. He and Erika have two beautiful daughters. 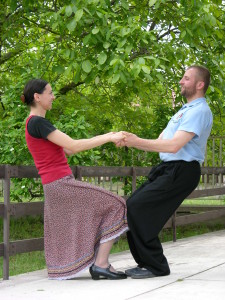 A native of Transylvania, Erika Kis Demeter has taught folk dancing and arts at various elementary schools in Romania and Hungary. In Romania she pioneered the concept of incorporating folk dancing and games into school curriculums. Erika has taught various folk dance camps including Magyarlapád, Kommandó, and Erdővidék. She was assistant artistic director at the Barót Erdővidék folk dance group and specialized in collecting authentic traditions from Erdővidék. She also earned a two-year folk dance teaching degree from the Romanian-Hungarian Dance Association. She is currently a student at the College of Performing Arts in Budapest, Erika has been a partner to her husband, Kis István not only in personal but also in professional life.